[AD] This Post Has Been Written In Collaboration With Culinary Schools. For Further Information On Check Out The Legal Page.

After an eating disorder, it can be difficult to start falling in love with food again. Specifically in regards to Anorexia Nervosa where food is often considered a cardinal sin. Learning to eat again is like breaking the rules of a game that only you and the inner demon were playing. The iron cladding that was carefully welded around the hunger signals and cravings is now being pried off. And anorexia is livid!

On the other side of things, it can be even more difficult with bulimia and binge eating disorders. Learning to fall in love with food again can be like an addict trying to develop a safe relationship with drugs. How can it work!?

But, it can! Even in a world where toxic diet culture and body shaming is rampant.

5 Steps to falling in love with food.

Take the time to learn to cook.

While in treatment for anorexia, I had to attend outpatient eating clinics. These were meant to help us with falling in love with food again and to cope with the anxiety around meal times. It all sounds mundane and straightforward. But unless you’ve suffered from an eating disorder, it’s impossible to know how difficult everyday tasks such as these become.

Looking back, I didn’t take these sessions very seriously at all. I just attended them to tick my ‘compliance‘ box. While I’m sure some of the attendees found it helpful, for me it just felt redundant. However, it’s only now as I’m further along in recovery that I can say that I took away some valuable lessons. We learned the basics of cooking without fear of the ingredients we were cooking with. In fact, during treatment was the first time I had ever cooked basic meals like lasagne and spaghetti bolognese.

But, prior to my current stage of recovery, I had no time for food or its production. It was a time-wasting chore. Now, with the help of my husband and sites such as Culinary Schools, I’m learning to see cooking as a hobby and a skill. With so many schools and careers to choose from, I’ve come to realise that food and cooking is a passion, rather than a necessary chore.

My husband and I have made use of their free conversion chart when working with recipes and odd ingredients. Not only that, but we’re making the most of all our groceries by experimenting with different meal combinations. Don’t get me wrong, it’s a hard road to go from fearing food to valuing it. But with gradual steps in the right direction, it’s becoming easier.

See food for the great social tool that it is.

Food and meals are very much intertwined with socializing. It’s only when you have an issue with food that this becomes strikingly apparent. At the height of my relapse, I isolated myself from everyone, including my nearest and dearest. I avoided special events and casual hangouts. If I did have to meet up with anyone, I panicked and often spiraled later that evening while alone.

Now I can go out for spontaneous meals and meet for pre-arranged events with little to no issue. But it’s taken me a number of years and a lot of hard work to get to this stage. Falling in love with food again isn’t as simple as wanting recovery. It’s about actively seeking recovery, and sticking to it, every day. There will always be that voice telling me off for eating but it’s a beast I’ll always have to battle. Thankfully now, however, I can actually win.

But don’t be afraid to eat by yourself.

An amazing part of falling in love with food again is learning to be okay with eating alone. For those of you who may never have experienced an eating disorder, quite often it can be difficult to eat when we’re both with people or alone. In fact, eating in general is somewhat of a curse! Personally, I found eating with unfamiliar people to be extremely scary. But on the other hand, eating alone was a ‘waste.’ It was a catch twenty-two no matter what way I looked at it.

I’ve since learned to love eating alone, specifically snacking. I love a good snack! And when I’m having a bad day and eating seems difficult, I remind myself that it’s okay to eat alone. It doesn’t matter that no one was here to verify it, or to praise me for it.

Be aware of your inner tyrant!

Sadly, an eating disorder is something that a lot of sufferers will have to live with for the rest of their lives. This doesn’t necessarily mean it controls your life, just that you need to be aware of it and the sneaky way it can crawl back into your life. Often when you least expect it. If you know you’re having a hard day, that’s when you take the correct steps needed to ensure that the eating disorder doesn’t step in as a coping mechanism.

This is an essential part of falling in love with food again; not letting it become anything other than what it is. Anorexia, and other eating disorders, use food as a tool to cope with difficult situations or emotions in our lives. But by taking away that control, food falls back into the role of being an essential part of being human, rather than a ‘poison.’

It’s also important to be aware of your other coping mechanisms, specifically those that center around self-care and verbal communication. Without either of these things, recovery is made ten times more difficult.

Make food and cooking work for you!

It’s important to figure out what works best for you. For some, meal preparation may be the answer to correct nutrition and intake. This works specifically well if you lead a busy lifestyle that leaves little to no energy for cooking. But, for others, meal preparation is a real turn-off. Some find it easy to let their hunger and cravings guide them to add variety to their diet.

How did you fall in love with food after a rocky relationship?

I would love to hear how you have or are working towards a better relationship with food. Are you learning to cook? Enjoying more meals out? Or maybe you’re still in the early stages? 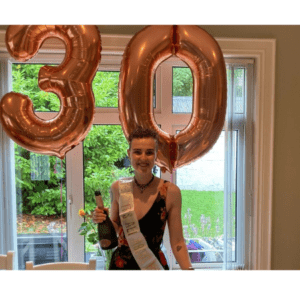